My painting for this exhibition is the Brugmansia x candida ‘Blush’ which had been exhibited at Kew end of last year / early this year.
For the reception of this exhibition, I will fly to New York for the first time in my life on the 12th and will stay there until Thursday 17th.  The reception will be on the 15th.  I will attend another reception on the following day.  I am looking forward to it.

Time flies.  One year has passed since last Florum 2008 exhibition. This year it will start on Saturday 12 September until Saturday 19 September.  From 10am to 5pm.  I will be stewarding there on the last day, Saturday 19 September all day so if you leave me a message, I will be able to see you.  My paintings are 1) flower of Magnolia sieboldii subsp. sinensis  2) fruit of Magnolia sieboldii subsp. sinensis  3) Rosa brunonii.

Hope to see you there:-)

The first exhibition of the Highgrove Florilegium in the UK will be opened on Tuesday 12 May until Monday 31 August at the Garden Museum, Lambeth Palace Road, London. If you ever have a chance to be in London, please visit the exhibition.

My painting is Magnolia sieboldii subsp sinensis and it’s like this. 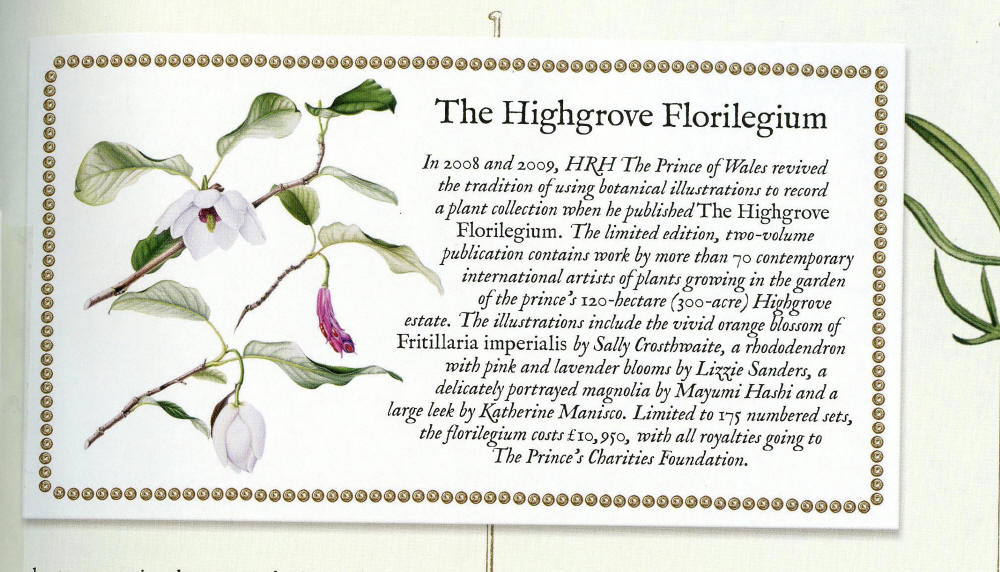 In excess of 40 paintings are to be exhibited at Kew’s new gallery of Botanical Art, the Shirley Sherwood Gallery. The exhibition focusses mainly on medicinal plants growing at the Physic Garden.  One of the paintings is my “Brugmansia x candida ‘Blush’” so if you have a chance to visit the gallery, please do so.  If you would send me your comment, it would be most appreciated. 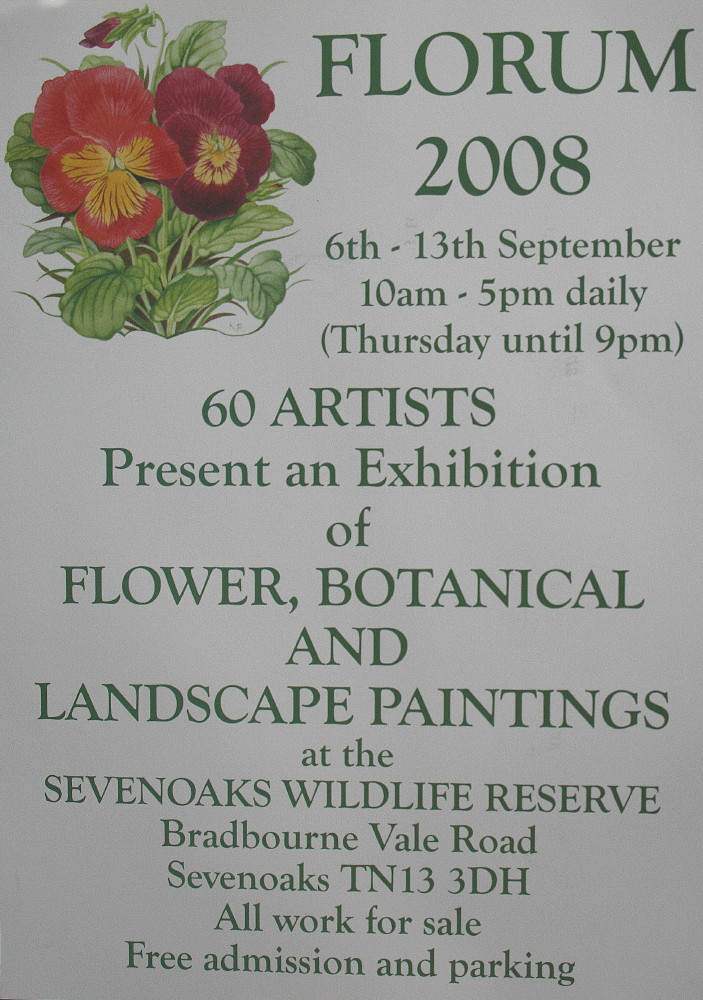 Florum 2008 will start on Saturday the 6th of September for a week.  The private view will be 6pm to 9pm on the previous evening, Friday the 5th.  If you could come, it would be wonderful.

One of my paintings at the show will be this. 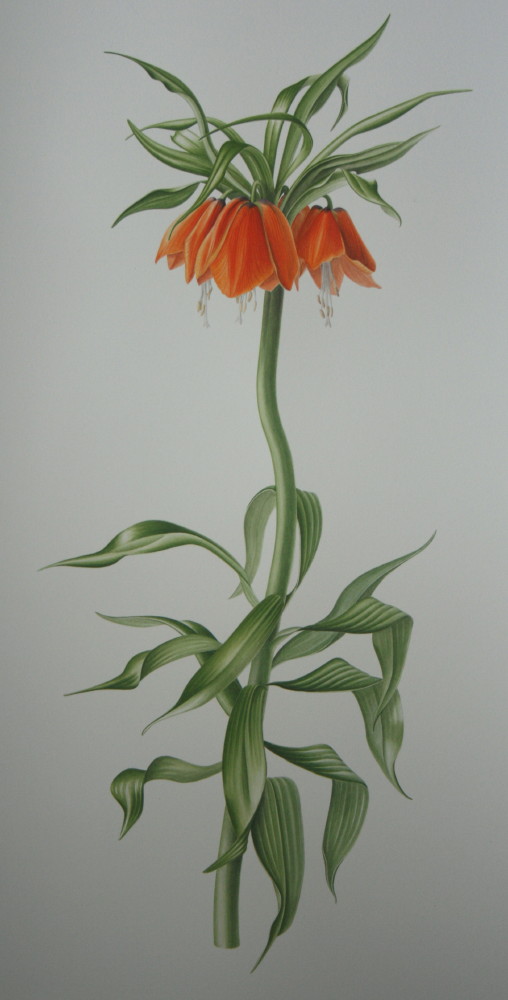 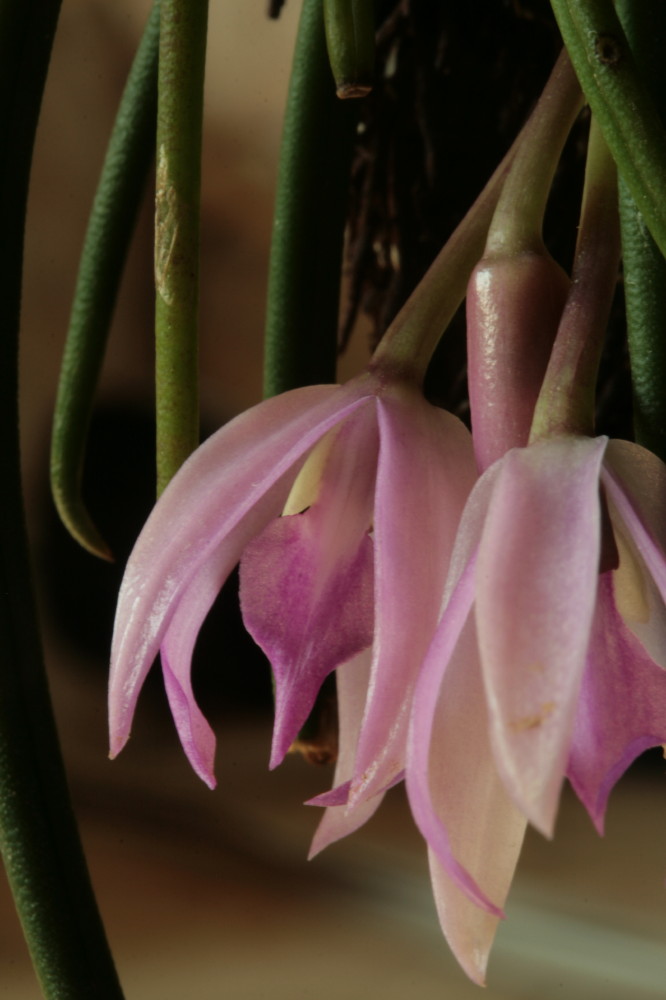 3) it is written in English,

I first thought I don’t need this book. However, I found it with lots of nice photographs, both orchids and Peru, I changed my mind and obtained it. This book includes all species of these three genera.

A page with Lycaste aromatica

With a lot of shot of Peru (Machu Picchu for instance)

With Mr Arias of PeruFlora

It costs £50. It is quite reasonable as this contains loads of photographs. It weighs 3kg. You can order the book from the website above, but if you would like one, you could write to me as well.

The annual RHS Orchid Show commenced at 6:30pm on Friday 14th March with the private view, and lasted for 3 days. As I exhibited 8 of my orchid paintings from the Peruvian cloud forests, I went there early on Friday afternoon to hang the paintings, after which I took a look around the orchids among other exhibitor stalls. I purchased all the orchids I wanted before the private view actually started, which meant I could enjoy my time there without any worry.

The exhibitor next to me was Paul Chan, another member of the OSGB, who exhibited his beautiful orchid photographs. As many of you may recall, he won the photography competition at the December meeting last year.

Of course among the exhibitors was the Orchid Society of Great Britain, whose committee members and helpers produced a beautiful display again this year. Consequently there were lots of our members at the show, so it became a very enjoyable time.

I pre-ordered some orchids (3 genera, 11 species) from the PeruFlora who helped me a lot when I was in Peru two summers ago. The reason I bought so many orchids (to me) was because I managed to keep many Masdevallias for a year since last March, which I first thought difficult to grow. It made me feel a little more confident to keep these plants. Among the newly obtained orchids are:

1) Cattleya maxima: This species was actually first found by Ruiz & Pavón and was named Sobralia. Unfortunately it wasn’t published and about 50 years later the specimen went to Lindley who classified, named and published this orchid as Cattleya maxima. If it had been published by Ruiz & Pavón, then we would not have had a genus Cattleya now, which I think is very intriguing fact. (http://www.chadwickorchids.com/Cattleya/maxima.htm)

2) Masdevallia rima rima alba: I bought Masdevallia uniflora last year. It was the first orchid I saw in Peru, and it was the orchid which Ruiz & Pavón had found 200 years ago for the first time, and it was one of the orchids I painted. This Masd.rima rima alba is sort of white version of the Masd.uniflora. In Peru, the local Indian called Masd. uniflora as “rima-rima” in their language, Quechua.

3) Masdevallia lilacina: When I saw this name in the PeruFlora catalogue, I immediately decided to get one, as I had just seen the photograph of this in our president’s Power Point Presentation. Henry wrote, “Masdevallia lilacina is one of the jewels of the forests here” and the flowers are absolutely elegant.

I very much hope that the orchids will be able to survive the environment inside/outside my house and that I will one day be able to admire their beautiful flowers.

There was a review about the exhibition in New York and my name is included.  You can click here, http://www.mayumihashi.com/blog/?p=535 or here (the article).

”Exceptionally delicate are the magnolia branches and flowers by Mayumi Hashi, who captures the buoyant gesture of leaves opening, wing-like, above a pale blossom. ” 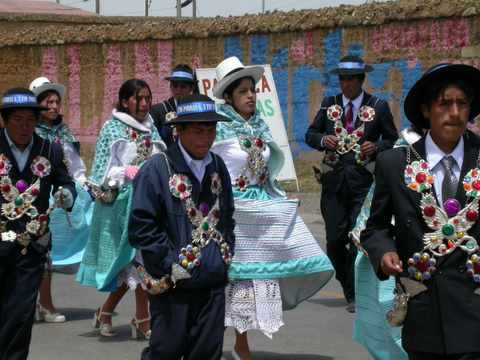 And there, music again! It is fiesta time again!!!